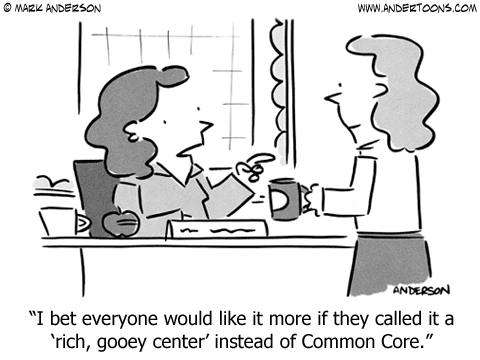 For something that has elicited so much controversy, the Common Core’s premise is really quite simple: to have a set of national standards for K-12 education which standardizes what students should be expected to master at each grade level. It actually does not tell teachers how to teach, and despite popular misconceptions, there IS no curriculum. However, as a part of the No Child Left Behind Act of 2001, every state had to test every child every year in 3-8 grade in math and reading, plus one year in high school. The results of these “high stakes” tests were used to determine whether a school was “failing.” Each school was expected to increase the percentage of students passing the test, each year, thereby meeting the law’s requirement for Adequate Yearly Progress (AYP). Students at “failing” schools could transfer to a different school, and if the schools persistently failed, they could be “reconstituted.” Many states, including Alabama, have recently received waivers from adhering to No Child Left Behind in order to create their own accountability measures. Alabama has adopted the Common Core, but unlike most states, Alabama has chosen to use the ACT Aspire as its end-of-year test.

As it stands, though, states have poured billions of dollars into implementation of the Common Core. Nationally, putting the Common Core in place will cost the states as much as $10 billion, with an additional estimated cost of $800 million per year.[1] This, according to many, has diverted needed resources away from teacher recruitment and training, facilities, and remediation for our most challenged students. For example, amidst numerous complaints about a crumbling school infrastructure, Los Angeles spent $1 billion dollars of revenue from a “school construction bond” in order to put Common Core testing software on iPads.[2] Last year, the state of Alabama spent $6.7 million dollars on their testing program, alone.[3] Of course, the textbook companies are thrilled with this development, because it allows them to sell brand new “Common Core aligned” textbooks to every district in the United States. This amounts to a profit windfall.

While I certainly have problems with some of the content of the Common Core, I think we could all find problems with any universal set of standards. The reason why Houston Academy will not be adopting Common Core has nothing to do with the quality of the standards. It is because I have not found credible research that backs the notion that common standards, alone, will lead to increased levels of student achievement.[4]  Sure, high standards are important, but it’s only a fraction of what goes into student achievement and gains in student learning.  What’s interesting is that when one explores the scores on the Department of Educations’ National Assessment of Educational Progress (NAEP), there has persistently been a four to five times greater difference within states than between any two states.[5] In other words, in Alabama, there’s likely to be more of a difference in test scores between any two school districts in Alabama than there is likely to be between the state of Alabama and the state of Massachusetts. Of course, states have had common sets of standards for decades. If standards, alone, could work miracles, we’d see similar achievement within our state. Additionally, whether a state has strong standards or weak standards bears no statistical relationship to either standardized test scores or student achievement.5

What does make a difference in student achievement? Well, years of data tell us that much of student learning is influenced by context variables that are beyond the control of the school. However, of the factors we can control, the literature has consistently confirmed that quality teaching is the single most powerful factor in increasing and improving student learning.[6]

That seems like common sense, right? I mean, I’ve never had a student come back after graduation who said, “I’d really like to thank the person who wrote your curriculum! That curriculum has made all the difference in my life. When I look back on Unit 6, Goal 3a in Chemistry – ‘Derive the empirical formula for a compound by using percent composition data’ – I can’t help but smile and think about how that has helped me in my life’s work and career success.”  No, what former students DO want to talk about is how Starla Lewis made them love math, Wanda Emblom made them want to be a doctor, or Paige Knight made them want to be a writer. 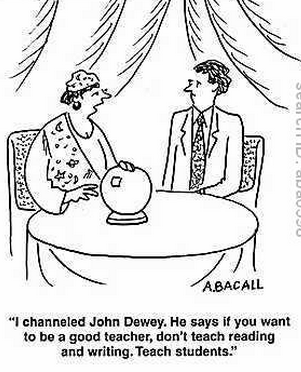 Put another way, students don’t learn from standards; they learn from teachers.

Permit me to use this analogy. I can determine the absolute best type of fertilizer to put on my lawn to make it grow and prosper. However, if I dump the fertilizer in the middle of my lawn instead of spreading it properly and at the correct weight, I’m going to kill my grass. We can have all the finest standards in the world, but if we don’t apply those standards properly, we are not going to improve student learning.  It’s the quality of the teacher that matters.

Actually, I’d argue, you could give us students at Houston Academy from any socio-economic background, and given a certainly level of motivation and God-given ability, our teachers at HA will lead them to achieve.  Furthermore, I’d argue that it’s precisely because our teachers are freed from the demands that public school teachers face– high-stakes testing, Common Core, exhaustive evaluation systems, individualized educational plans, state certification requirements, monotonous paperwork, Goals 2000, No Child Left Behind, etc. – that our teachers are free to focus on children and their learning needs.  It’s because our teachers don’t have to focus on a broad set of national standards that they can focus on having high standards for every individual student. Those standards are much higher than anything the government has prescribed.

Learning is a very complex activity, and we know that every student learns differently. Not all of our students are going to be successful all the time, but what I can tell you for certain is that throwing billions of dollars at a set of national standards is not going to fix our problems. Focusing on teachers and students just might.